1
I put a set of '98 GT seats into a friend's Fox Stang...huge improvement. He's also a bigger fella and said upon the first drive with the new seats that it felt a lot better.

If I could find myself an Expedition Platinum eco boost with cloth and withOUT that damned moonroof, I'd be happier than a hog in a new mudhole.

Unfortunately....effing Ford and their junk moonroofs.

No difference. The lights that ARE different are the inner marker lights, they're inboard of each headlight housing...

4
Those are 17" wheels. Those are also some pretty good sized brakes you have on 'er.

5
Good deal getting it away from the first place...they sound like a bunch of PUPPIES. (wtf is up this got-dammed puppies bull puppies?!)

How's the truck, BTW? Haven't seen anything on it in some time..

6
puppies it Carm, we need to get back into some Tbirds lol
7
Still kicking, though I haven't had a Tbird since 2014. (That may just change soon..)

But we keep on keepin' on. At least I make decently good money now. My head's in a better place, I've literally got nothing to complain about.

Let's git it!
8
Yeah, mine were somewhere in the neighborhood of roughly inch and a half, 2 iinches. Never did get a measurement or even a before and after pic, but I do have random pics of that car later on and it was definitely not rocking the 4x4 look that these cars were famous for, unmolested..

Yeah, SN95 springs are shorter than stock units, ride quality is about the same, maybe a little stiffer.

Next time (and there will be a next time!) I'll run some '03/4 Bullitt springs or Mach 1 or something similar.

I have a line on a car. We'll leave it at that until I have something more concrete.
9
Nice work!

Yes, covid really can puppies up one's plans. Kept me from getting a job, but the upside of that is because of the one missed shot at the one place, it put me in a position where I ended up doing something that I really like and pay about .40 more per hour.

I'm still looking for a new (to me) Fox Bird or Mark VII to be a fun car, occasional romp to work in project.

10
Hell yeah! Looking forward to pics of the car and work

11
Put a jack under the control arm..let things down a bit, and to help keep tension on the spring. Also, double check the springs....they tend to break. If so, no worries. SN95 Mustang springs are pretty much an equal replacement.

(too lazy to look, well, more like not enough time LOL)

When those go bad, it will make it run puppies-rich and do what you are describing. Also no/low vac to the FPR will pretty much do the same.

Like softtouch says, the cats being (potentially) plugged up has NO bearing on the eec "telling" the injectors to pulse in more fuel..that will NOT happen on this eec system...

As mentioned, I'd test fuel pressure, then vac at the FPR if it's suspect (and in my opinion it sure as hell is), and Foe's point is valid too about spraying carb cleaner around the intake and such.

Possible you have a torn or cracked hose on the bottom of the upper? When I did the Cobra intake on mine, one of those hoses was cracked from being on the shelf for a time before I got it and with the engine running, it would open up and make it act plumb silly.

Vac gauges are worth their weight in gold coin, though you still have to the leg work to find where the leak(s) hang out...

I want a black on black 91 LSC like, bad. Keep the air ride, nice wheels, updated brakes, and a coyote 10r80. North of 300 hp and smooth as glass and some pretty ok-ish mileage. Maybe a Whipple or a vmp blower on it at some point. I think that would be tits.

That'd be some tig ole bitties. I'm also looking at a Mark Viii right now....rather seriously, for that matter. Seller also has a complete 32v from a Mach 1 that goes with. Just wants a supercharger. Those are easy enough to get.

Whatever happened to stockish daily driver? LOL
15
The air ride puppies, if bad, can be retrofitted to standard coils and struts/shocks. Indeed, I have a set of near new stuff that would probably work. The ABS stuff is a littler harder to do if it you wanted to replace it, but not impossible. Still, a PITA, but in my case, it would be more of a hassle in that instance as I work 7 days a week, so the time to repair/replace would be the commodity that's in short supply.

I've even found myself looking at Mark VIII, too, though I'm not a big fan of the MN12 chassis. Those are fairly potent cars for what they were/are, though and nowadays there's all kinds of 32v Mustang stuff that can be put into them. S/C, cams, etc.

I think I'd rather stay with a Fox based car though, plus I have this mild 5.0 and mass air stuff just begging to be stabbed into another car. That it is also been matched with a T5 (that now needs work, hmm), I'd say that would make for a fun daily, while still getting better mileage than the fat ass I drive. Here's my current daily:
Those are 33x12.50 tires on there, for reference lol 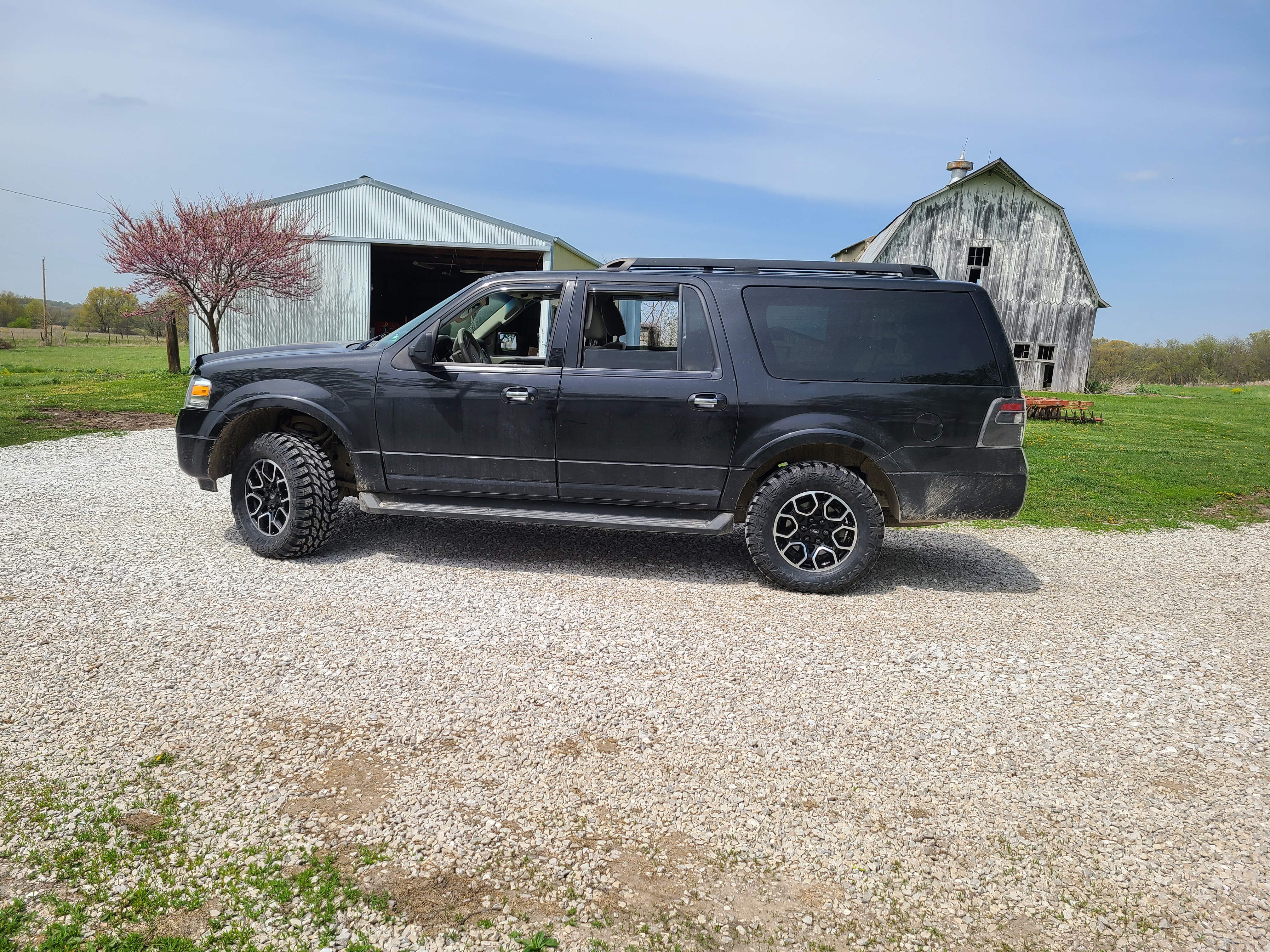