1
I learned tons of stuff doing this swap, just ask ... 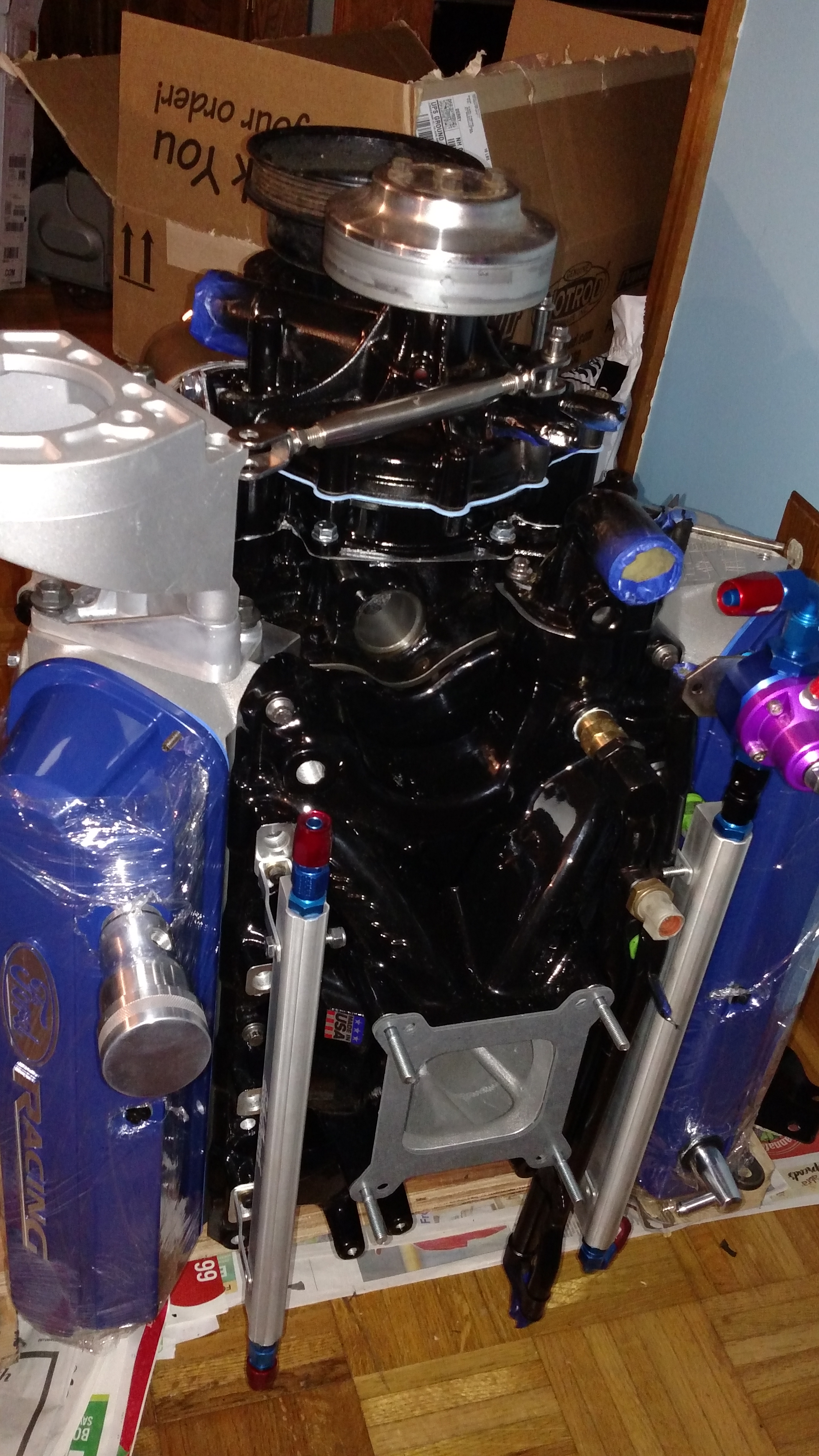 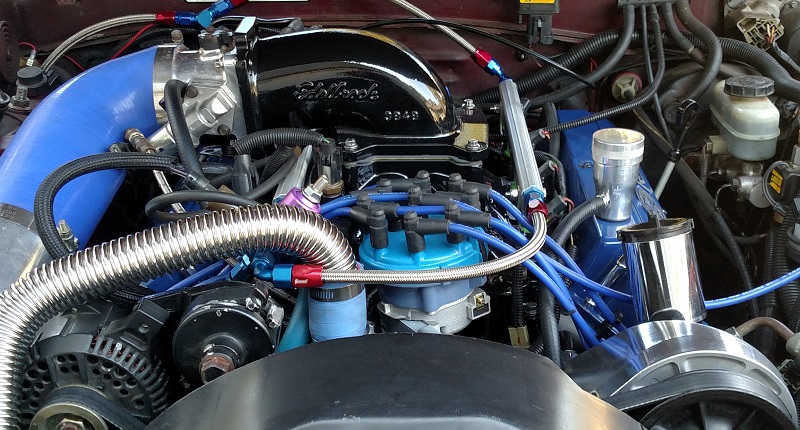 Oh yeah, it fits under the stock flat hood.
2
I think I figured out an additional reason why Ford made the oil pressure gauge "fake". It seems that between the tolerances of even the fat sender and the dashboard that there was no winning.

All over the place. Oh, and you can now see the reason why they call it a sender and a switch, because it becomes open circuit below 4 PSI.

Now look at what I got for readings when I put a decade box between the sensor wire and ground. It's almost as if the gauge wants to see something between a real sender like the Autometer 2241 and the OEM switch/sender. Here are some numbers and graphs to confuse you:

Bottom line, using the fat sender, mine reads off-scale high due to the sender reading low by 5 ohms (I used air pressure @ ~58 psi and saw 15 ohms, yet it should read ~20 ohms looking at the plot. EXCEPT that if you look at the range of acceptable values for a typical sender unit (PS4), it's probably barely within tolerance :/

If I add a 10 ohm resistor in series with my sender, it reads "O" cold and falls to "R" when warm.

Of course if you note in my pic above, the gauge has 5 readings,


It's possible I'm off in my estimated range of pressure of each bar, and it follows the nominal gauge output, or maybe the lower tolerance, but it matters not since there's very little to be learned from a gauge that can't read below ~40 psi.

Unlike the speedo 85MPH limit fix, it's unlikely that the shared bar gauge could be made to read properly without reprogramming a PROM in there. If anybody has any electrical diagrams of the speedo, or any idea how to fix this problem, I'd love to see it.

The tolerances are so loose, I wouldn't even dare to recommend a sender and resistance to add in series to get it to use the 3 available bars intelligently. I am considering getting the Autometer 2241 and trying to work with that as it must have a better tolerance than the cheesy OEM "sender/switches"
3
I've already solved this problem, but as I found while Googling, these sorts of posts with pics can be invaluable to the next person who runs into this issue.

So, the stupid steering rack was in, after I had to drive 15 miles to a different Autozone to get a different rack where the Chinese hadn't already pressed some bizarro bushings into the bushing tubes that I couldn't knock out with a sledgehammer.

My T-Bucket, which had to be out of the garage so I could work on the Cougar, got drenched in rain because I had to wait until morning to finish the install

I'm slow or forgetful or something, but it took me a couple of days and Googling to realize I just had to tap the end of the collapsible steering shaft back into the steering column to get me back to (about) where I was before. Still have barely any clearance, but I can try moving the engine and steering column a bit to increase the clearance to a acceptable amount:

4
So I finally got the 428W close to the point where I can fire it up.

I primed the oil pump, then decided to ensure the starter would turn over the engine - just to make sure the battery I've been trickle-charging since last year has what it takes, ensure the mini-starter/wiring is in decent enough shape to spin a 10.7:1 compression motor & make sure the Quicktime SFI bell and starter are compatible. Turned over nicely.

Then I decided I'd prime the fuel system & check for leaks in the 15 new fittings. I turn the key and nothing - the rod seems to have become disengaged as I don't even feel the spring for the starter switch. The only thing I've done is loosen the 4 bolts holding the column up so I could shift the steering shaft away from the header a bit (had to dent header as well.) Seems unlikely that could have hurt anything. Any ideas? Is this a common occurrence or has anybody else run into this issue? The steering wheel locks as normal when I turn to the off position and remove the key. I figured I'd ask before I start taking it apart tomorrow morning...
5
A squirrel chewed through the heater hose (maybe it drank antifreeze and died

) and I only have a non ECC replacement hose.

Well, I decided I don't care if it works like it's supposed to cuz I never use it anyway. I tested the thermal switch and it's Normally Closed. I heated it and it opened up, meaning I can just remove it and the system will work fine, it just won't wait until the water is hot before operating. I apologize if this is common knowledge. :hick:
6
Just wondering if anybody who's done a 351W swap has run into this issue and how they solved it. I thought the Canton was a stock pan with the "T" welded onto the rear sump area. I'm using the Chuck mounts that I bought years ago, finally they're being put into service :hick: Looks like I could shim it with maybe 1/8" thick washers?
7
http://www.ebay.com/itm/Mercury-Cougar-/272279757809

11
I haven't been able to read this site since the software was upgraded. The low contrast light writing or grey background options offered make it so I have too much trouble differentiating the thread titles from the other text. Just thought I'd mention that since I haven't posted here in a while.
12
Uggh, I read TC's thread and it reminded me that yeah, I've been having second thoughts recently as well.

I've put my heart and soul into this car over the years, yet what I have in return is tendinitis from repeated clean and jerk lifts of the Tremec (and other stupid human tricks) and a car that has me constantly gritting my teeth as I drive it.

1) It leaks/seeps oil from the front seal, the low oil level sensor, the rear seal and the pinion seal. It used to leak from the Tremec too, but a new TKO500 fixed that. I've meticulously put the best seals in - front seal more than once - yet it just can't seem to stop leaving oil spots that ruin my driveway.

2) It makes a loud clicking sound from the rear end when I back it up in the morning. Every part in the rear is new (control arms, shocks, springs w/poly cushions brakes, rear-end internals.) I even bought brand new caliper pins thinking that it was caliper movement. It persists. Now it sometimes clicks it when I turn corners and give it gas. WTF? :punchballs:
3) The exhaust drone drives me batshit crazy. I spent a mint on Corsa mufflers that were supposed to fix this problem, yet they had no effect at all. I have some catcos that I was going to weld in to help reduce noise, but so far I haven't been motivated to work on the car much this year. I know, nobody forced me to have a free-flowing exhaust, but I'll be damned if I can figure out how to have a high-flow exhaust without the insanity - no matter how much money I throw at it.
4) Vibrations. I spent friggin' $500 on a carbon fiber driveshaft to go along with my balanced rebuilt engine, new tranny and completely rebuilt rear-end and it STILL has vibrations that no newer car has. Why does one have to be a rocket scientist to figure out the vibration problems (we've all read the long threads on this topic.) :punchballs:
5) Other annoyances. Vibration that sounds like glass chards vibrating just behind my left ear - this is a new one as of last night. Stereo and other illumination that is intermittent and I'm tired of trying to fix. Oil chime sounding for almost the entire 70 mile round trip to a friends place (yeah, I ordered the larger sender and extension - another $50 down the drain.) Stereo cutting out on the left side, then not doing it for months at a time. There are a dozen more of these that I can't think of right now.

I've spent $20,000 on this car over the years trying to have a nice riding larger car that I can also take to the track, but I'm not sure I can sustain the effort needed to figure out how to achieve that goal. Perhaps that's not even possible on this 23 year old platform?

When you spec out one of the 2011 Mustangs that can do 11's in the 1/4 with just bolt-ons (NO power adder), you have to wonder if it's worth the time and effort trying to find the right combination of parts that's already been done for you by Ford.

Look at this beauty with a glass roof.

Am I nuts for wanting to take the easy way out? (albeit very expensive - I'd have to sell T-Bucket to get in the ballpark to afford it - not sure I could part with the Cougar even with it's annoyances.) What say you?
13
Feels like this ->

except someone is hitting my big toe with a ball peen hammer over and over again. For 3 days and counting

.
14
I was walking out of my basement door when I almost stepped on the snake that lives back there (yeah, it's my buddy). As I was doing the boogaloo trying not to step on it, it jumped the threshold and disappeared into the basement - I haven't seen it since. Any ideas on how to get this critter out of my basement (besides waiting until I smell it?)
15
It's quite the looker - it really grabs your attention.