1
Ditching the automotive aftermarket world to return to the OE environment.  I've had it with Napa ("parts are like a box of chocolates"), I've had it with oil changes (I mean ASE MASTER L1 L3, FFS), I've had it.  I can't even anymore.
Tesla up and scooped me out of my misery.


Everybody pray I don't melt my arm off on an orange cable while I'm flying free.

2
I've decided that parking my daily in a heated garage this winter is more important than storing my TBird in a heated garage, so I'm looking for recommendations for a good, solid, WATERPROOF car cover.  Who has a story and/or recommendation?
3
I was cleaning out my garage yesterday for my upcoming move, and I rediscovered my OTHER T-bird/cougar EVTM's.  A lot of people have made use of my 88 wiring book, but I'm coming with 1981, 1982, 1983, and 1987 in the next couple days.
I need suggestions for hosting the files when I'm done.  I want to be able to have them widely and openly available to anybody who needs them.
4
So who has one, and what do you want for it?

I know a lot of guys swap EATC for manual, I've got a whole manual setup in my garage, but I'd rather keep the EATC.
HVAC control flashing, code is 08, been through thee pinpoint test, even took the actuator apart to verify it isn't jammed.  If this were a newer car, I'd have had one 10 minutes ago.  Who's going to save my life here?
5
So my 16 month old is WAY out of her Recaro docking infant carrier, and into a convertible seat.  We put that seat rear facing in my wife's Fusion with no difficulty whatsoever, BUT, to be usable at all in the TBird, she has to ride front facing.  The recommendation from anybody thinking themselves any kind of authority at all, is 2 years/40lbs for front facing, but in Michigan, 1yr/20 lbs is legal. And besides that, a fullsize car seat in a rear facing orientation is just not workable in my car.

Does anybody know of, or has used any means of installing LATCH system mounts?  That would include the upper anchor as well.  Some of you guys have to have been through this before me, what did you do?
6
I'm 39 years old; Why has it taken til now to figure out that if I'm not going to do things right, I should just not do them?
A few years back, I cheaped out and 5-lugged my car, SN-95 axles, drilled the drums, got Ranger rotors, wheel bearings and caps, tried to find axles seals and called it good.  I had all sorts of problems, like having to machine pad clearance around the hat of the rotor, and try to match up an axle seal that never sealed the axle, or stayed put in the axle tube.  The brakes pulled slightly left, and the drums ALWAYS had free gear oil in them.  If that weren't enough, I transplanted a 7.5" 3.73 R&P and generally did it poorly, so that the pinion noise was unbearable, and not really wanting to go back in there and face it, I just ran it. 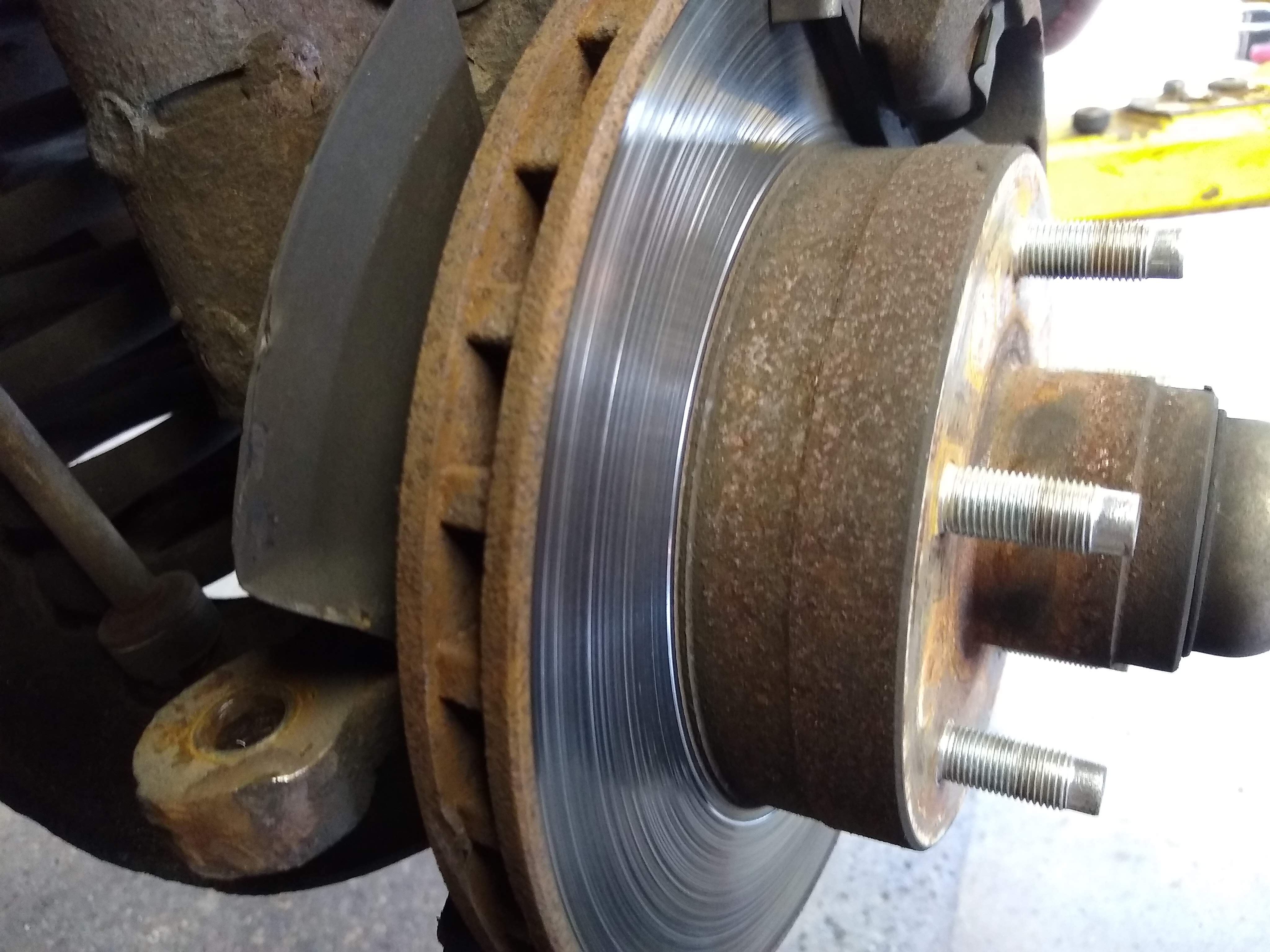 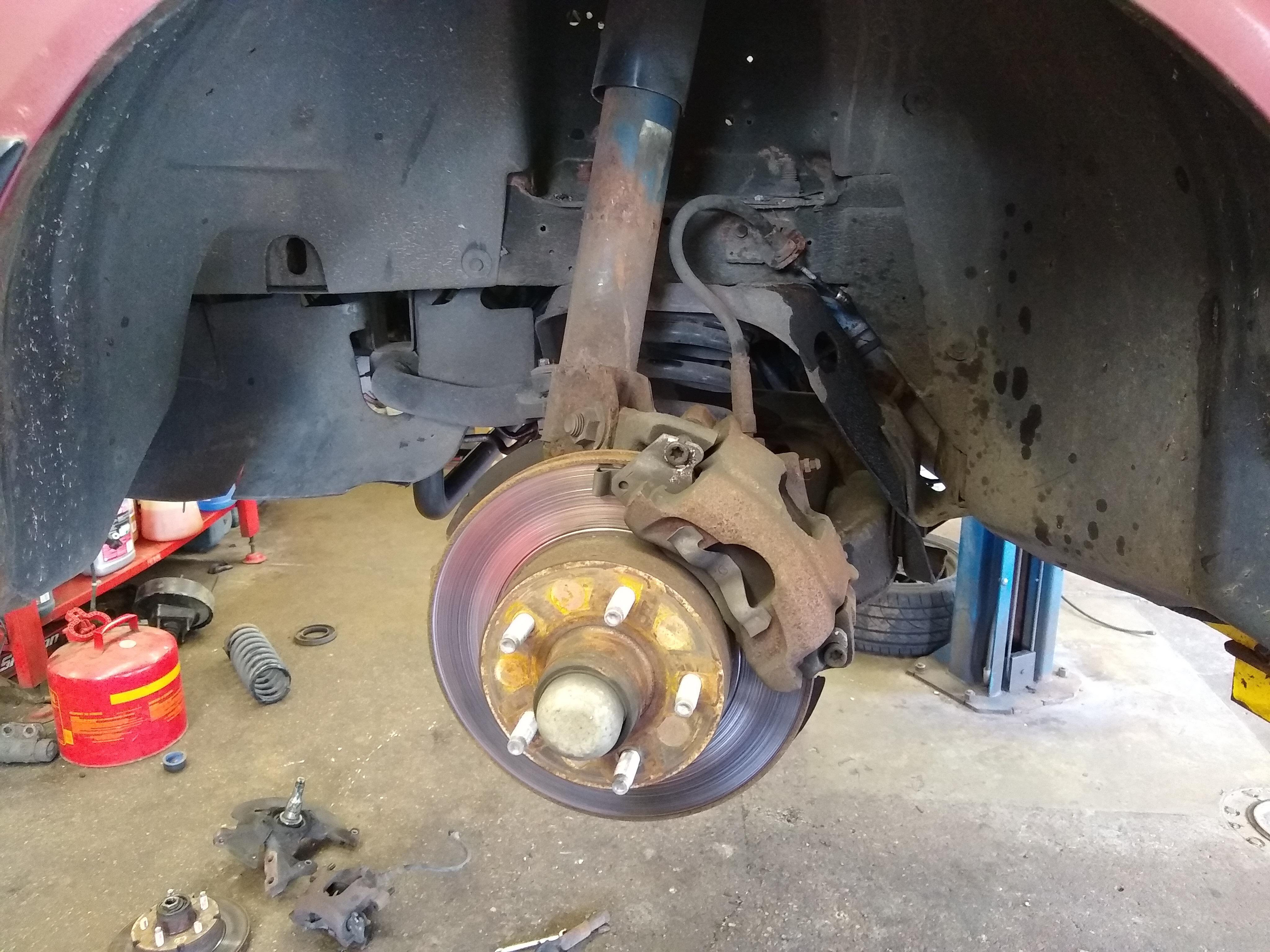 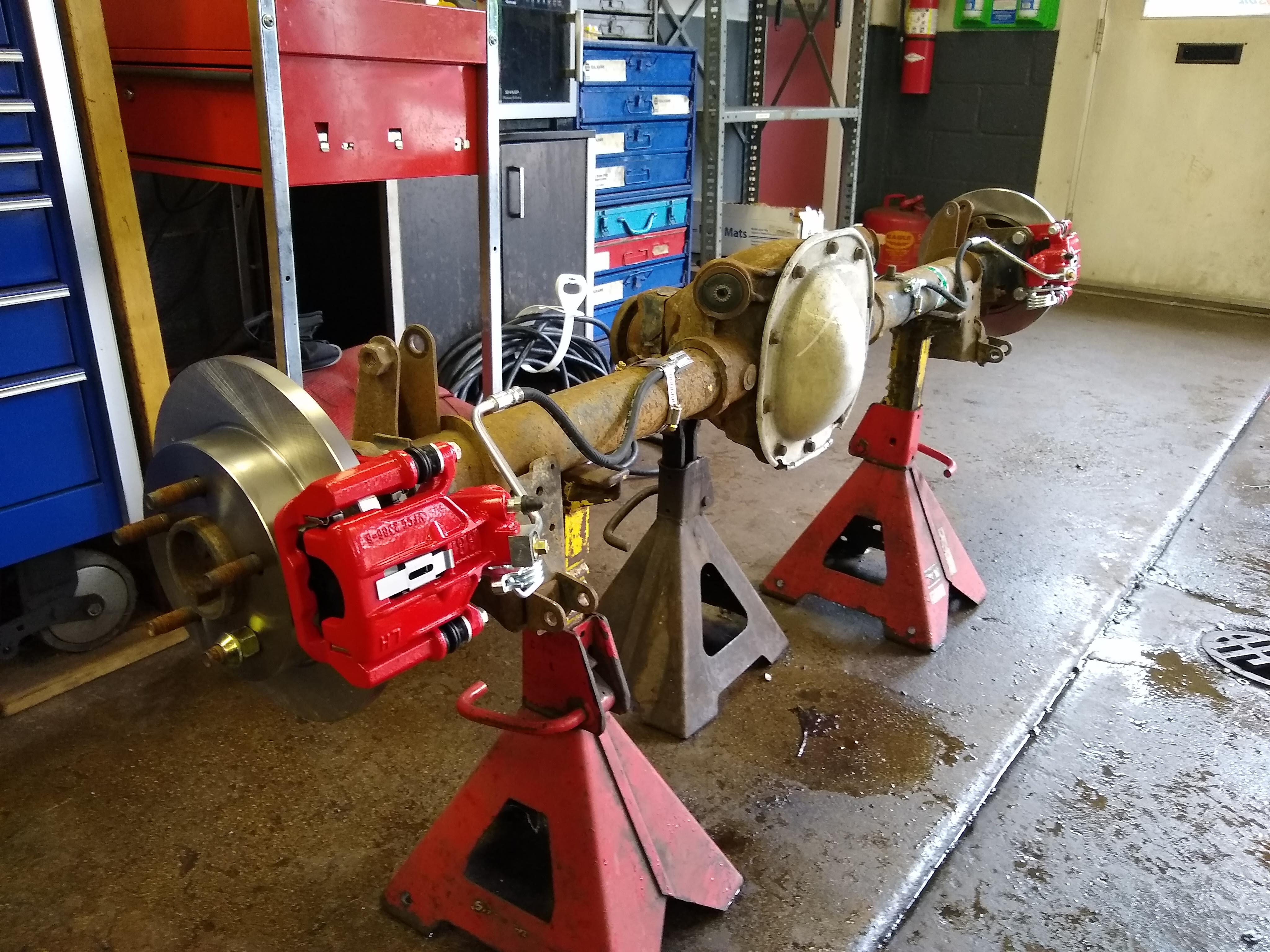 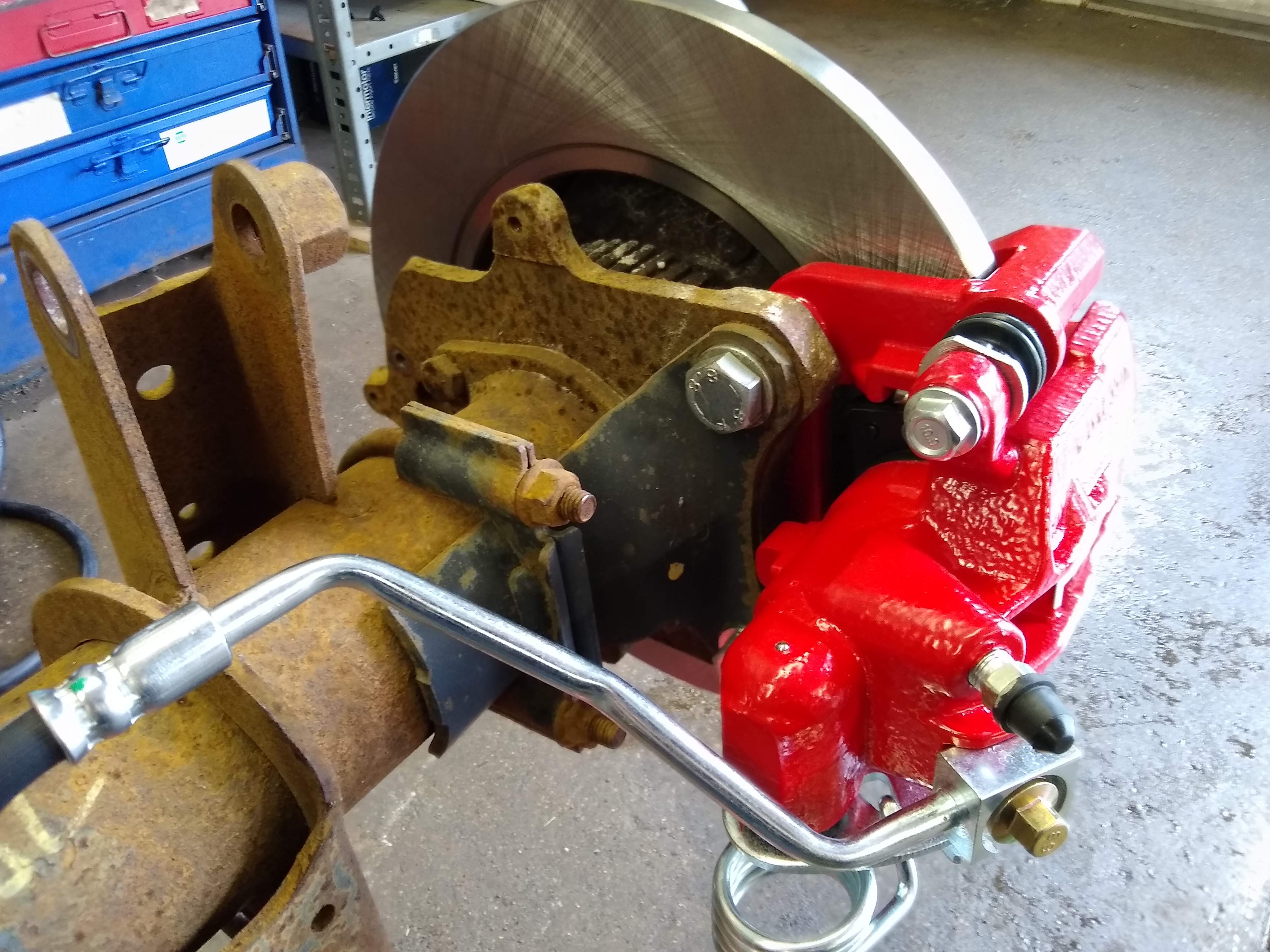 Ghetto as fuck, but very secure. 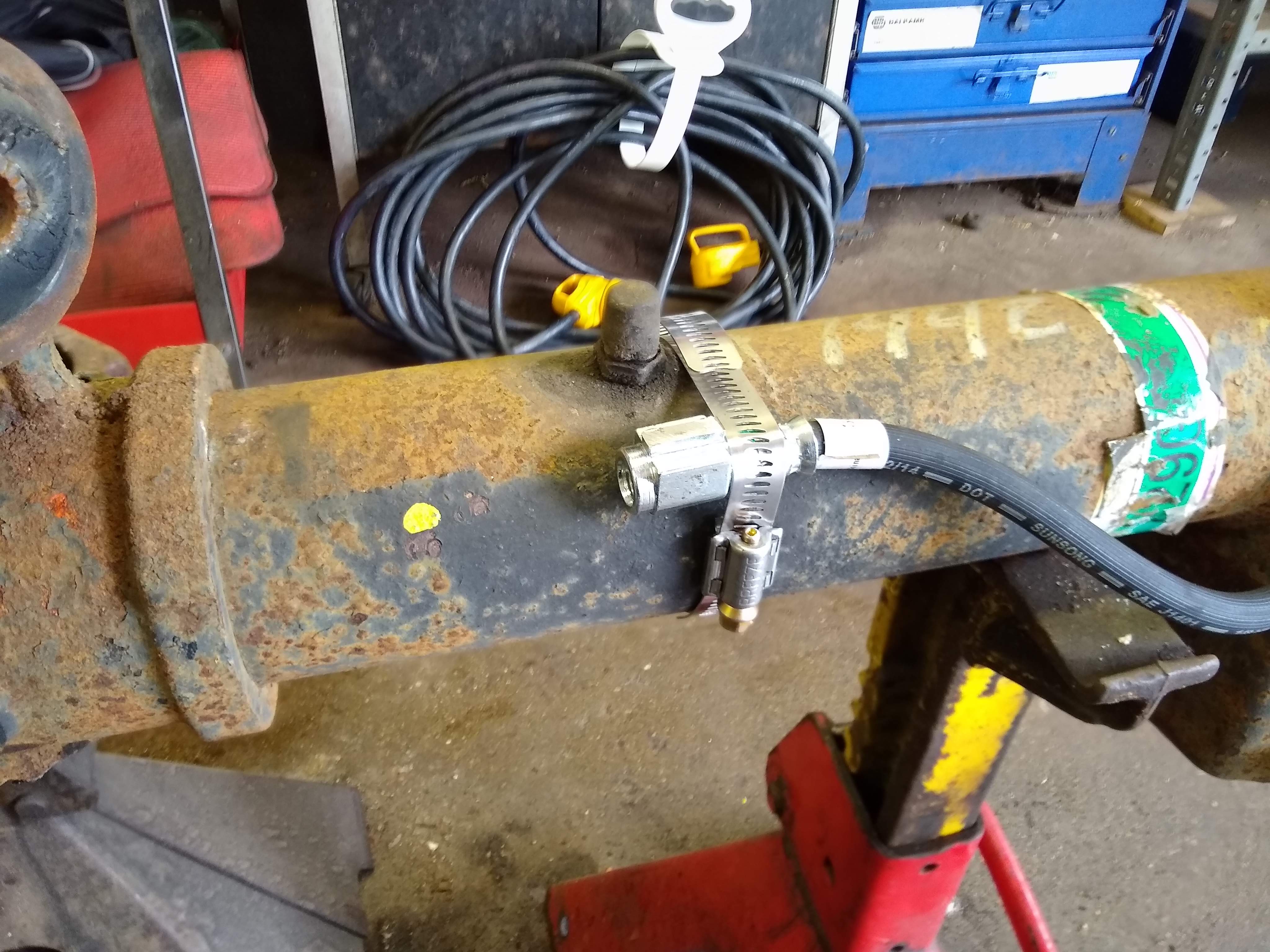 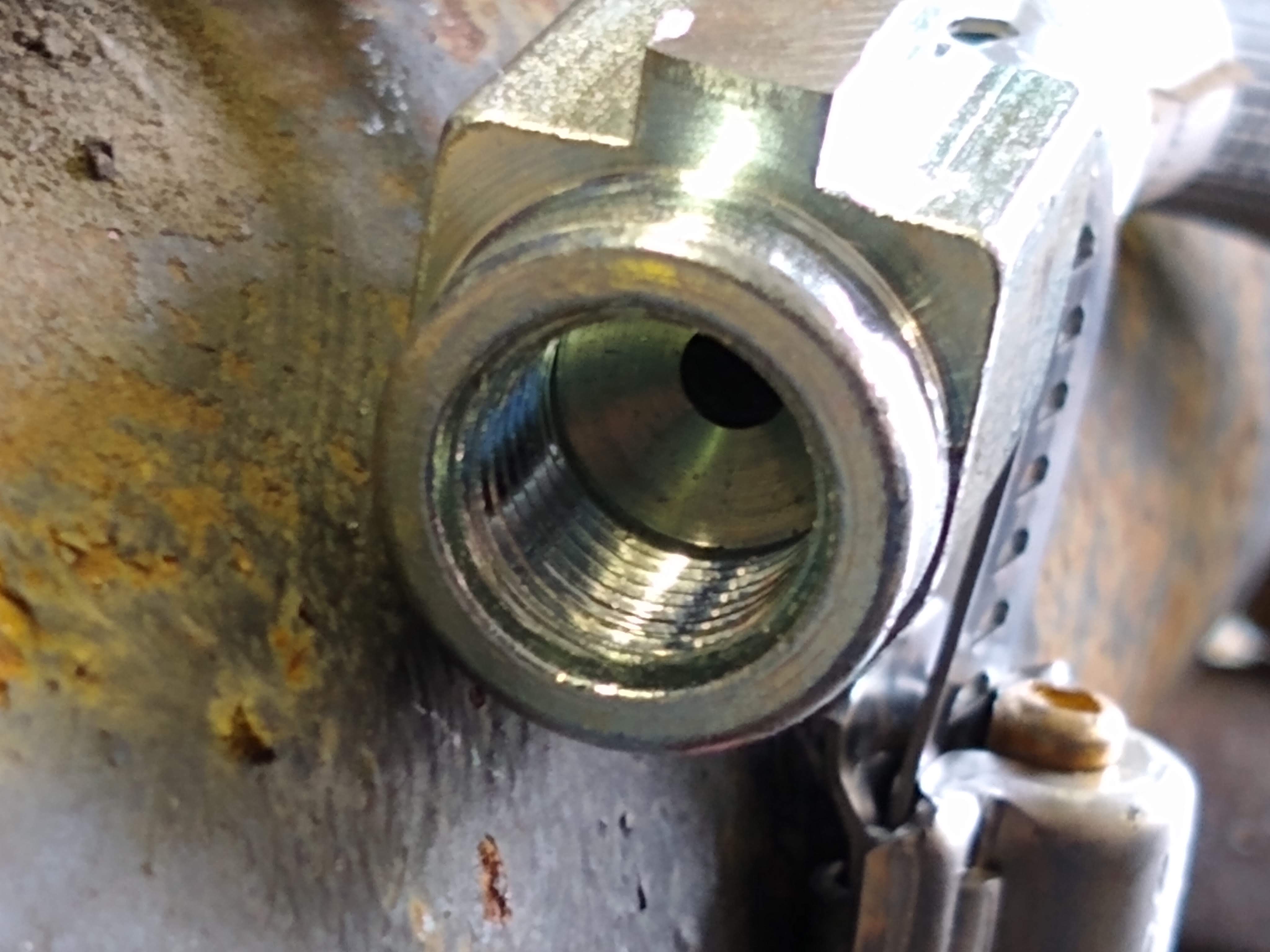 Made a hole to mount the block 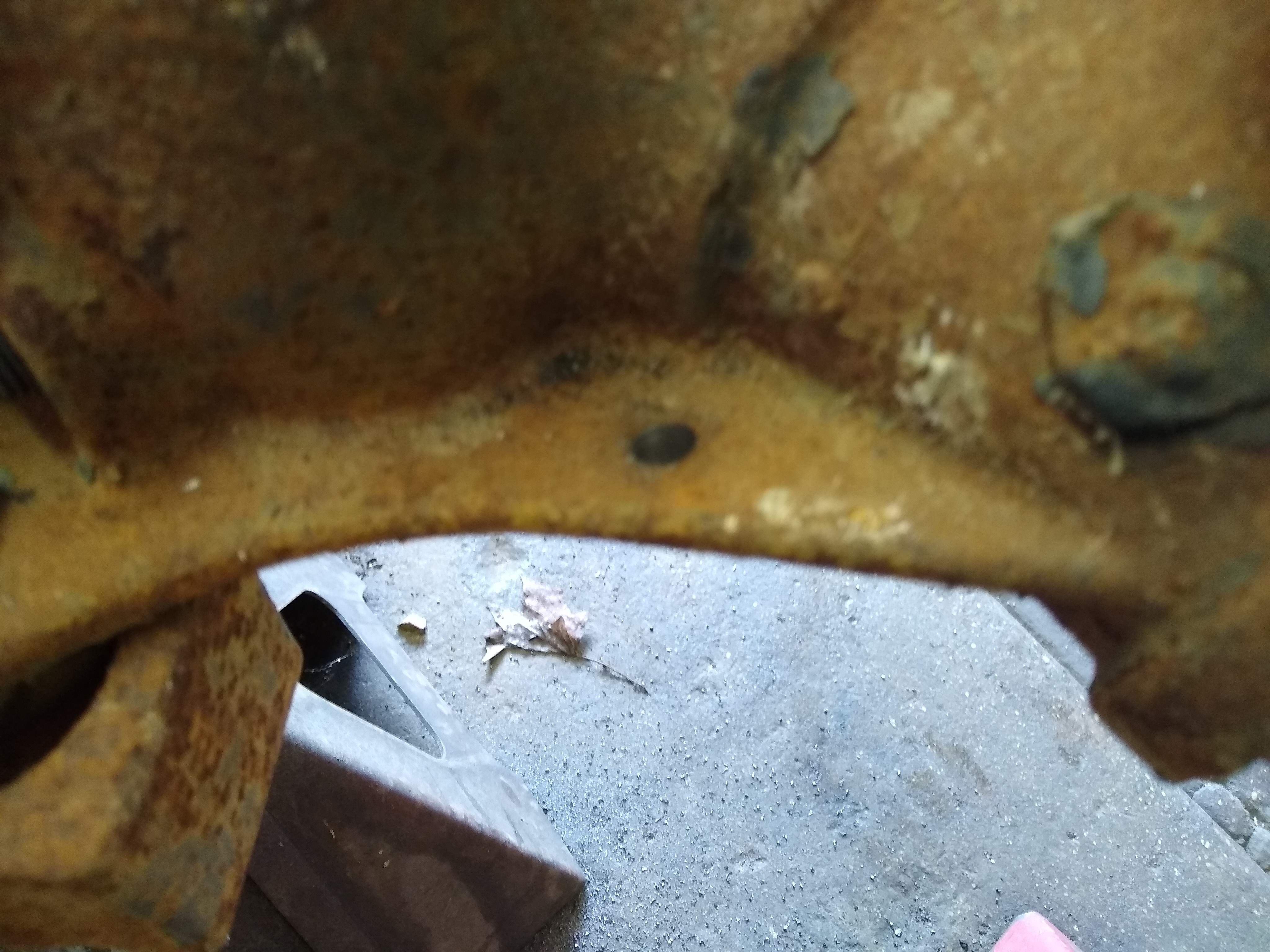 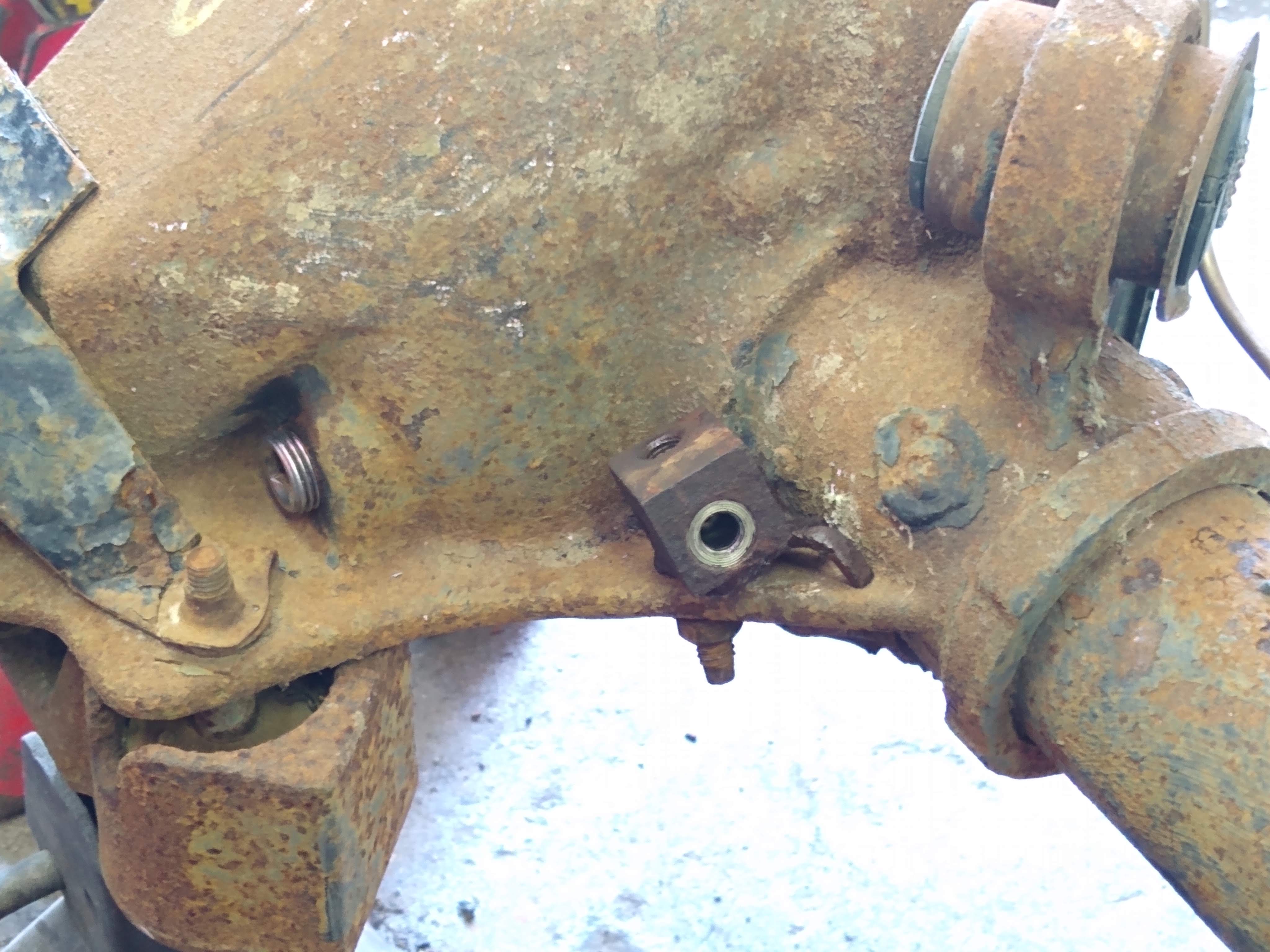 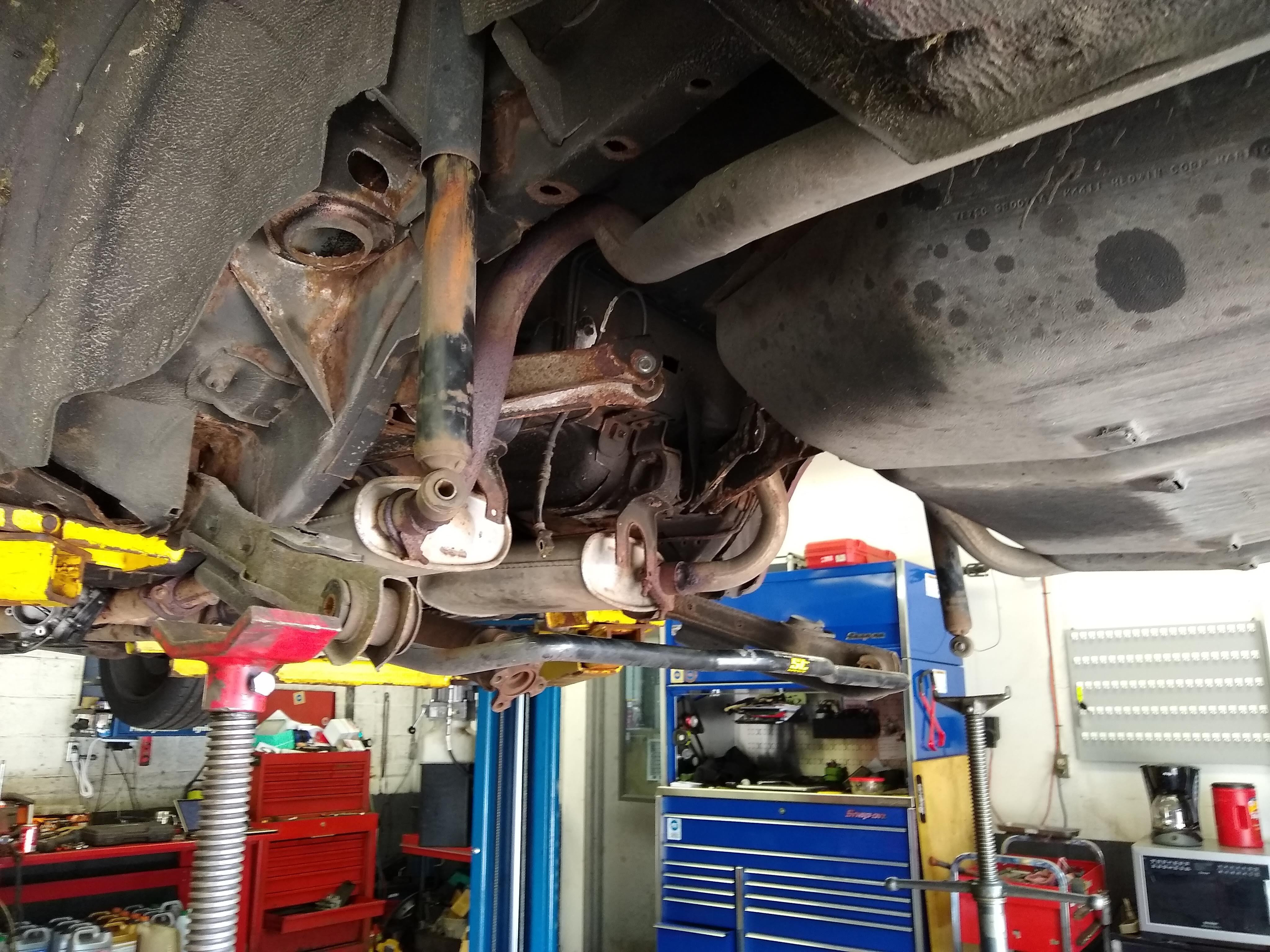 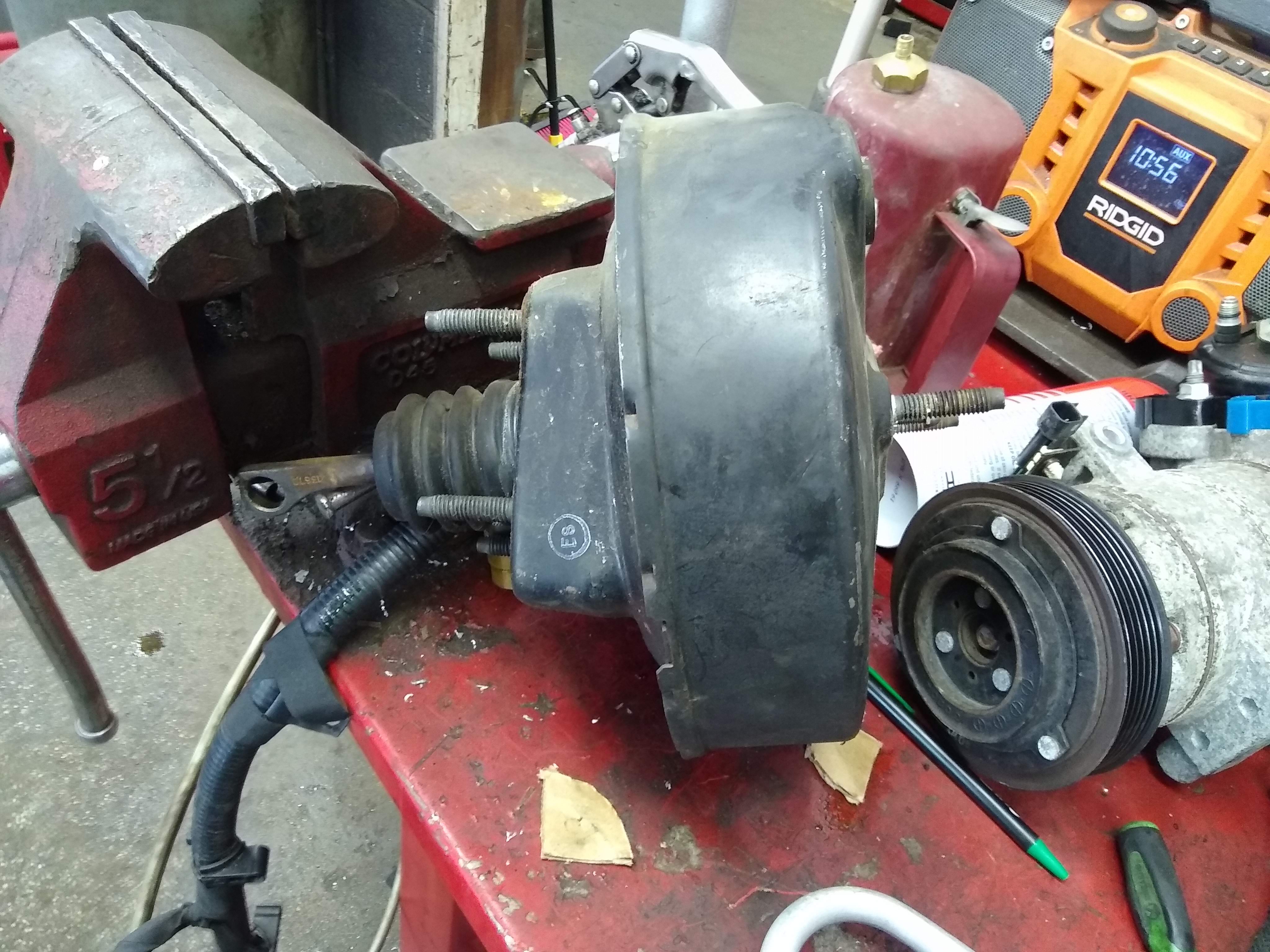 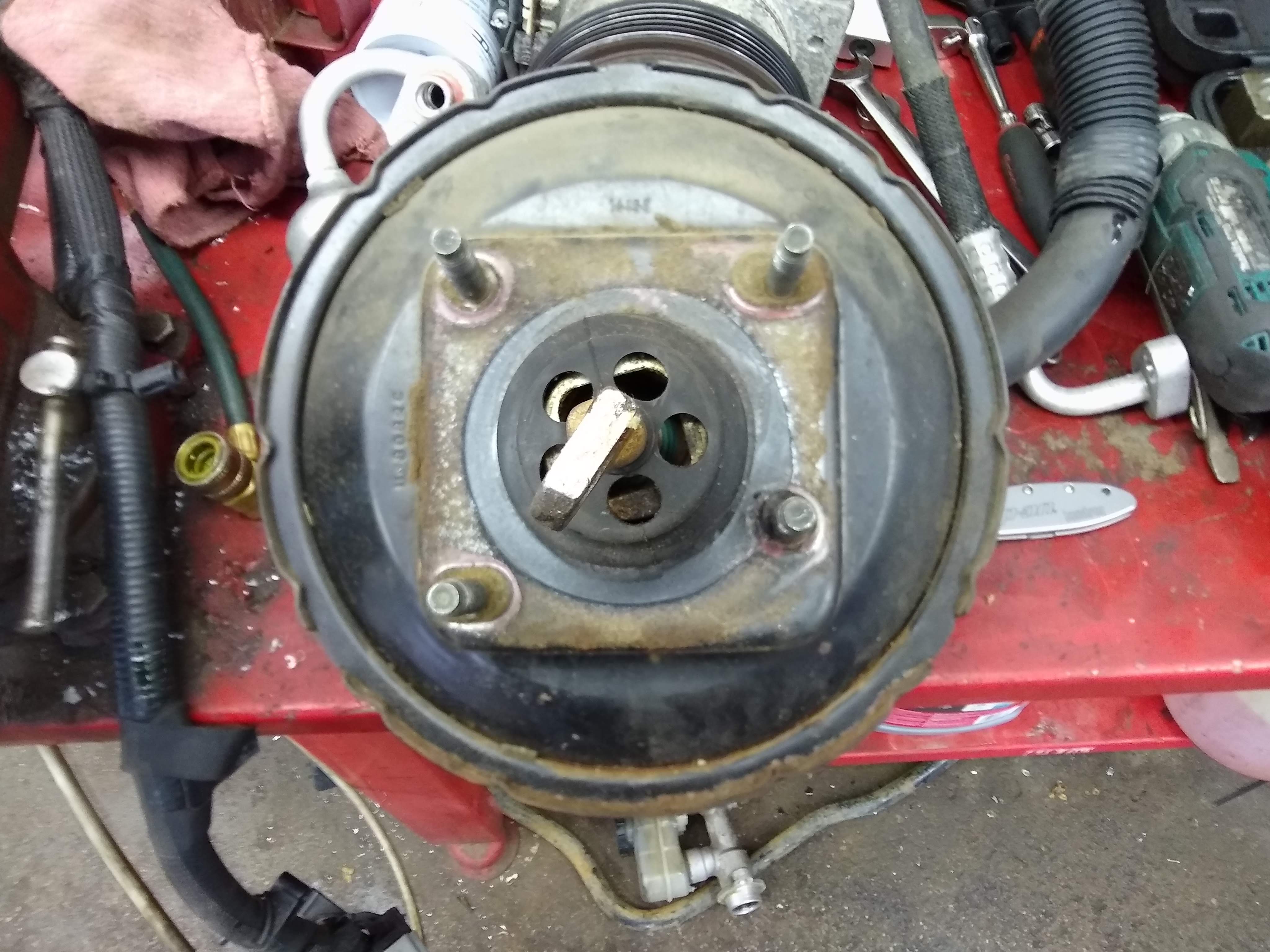 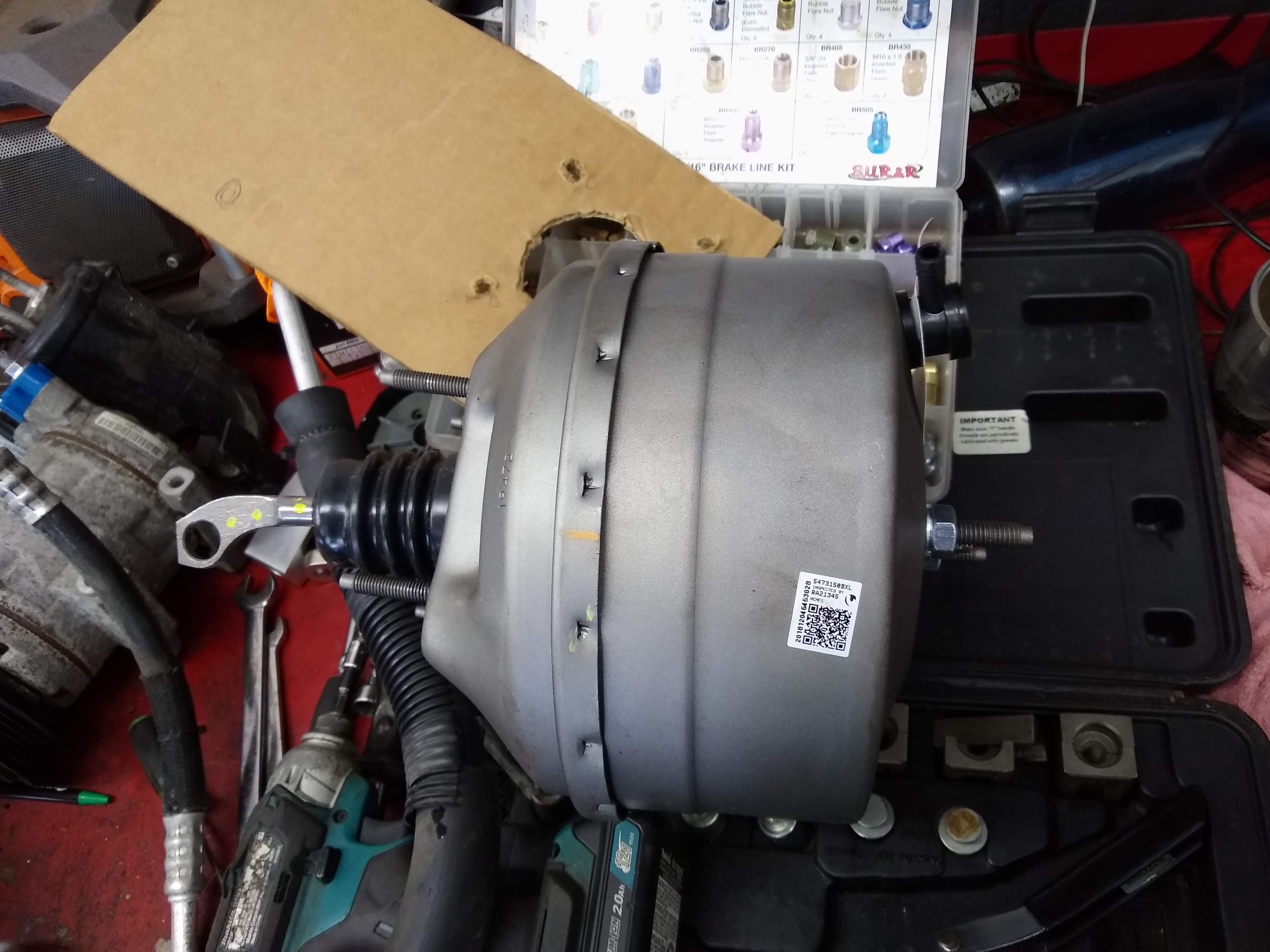 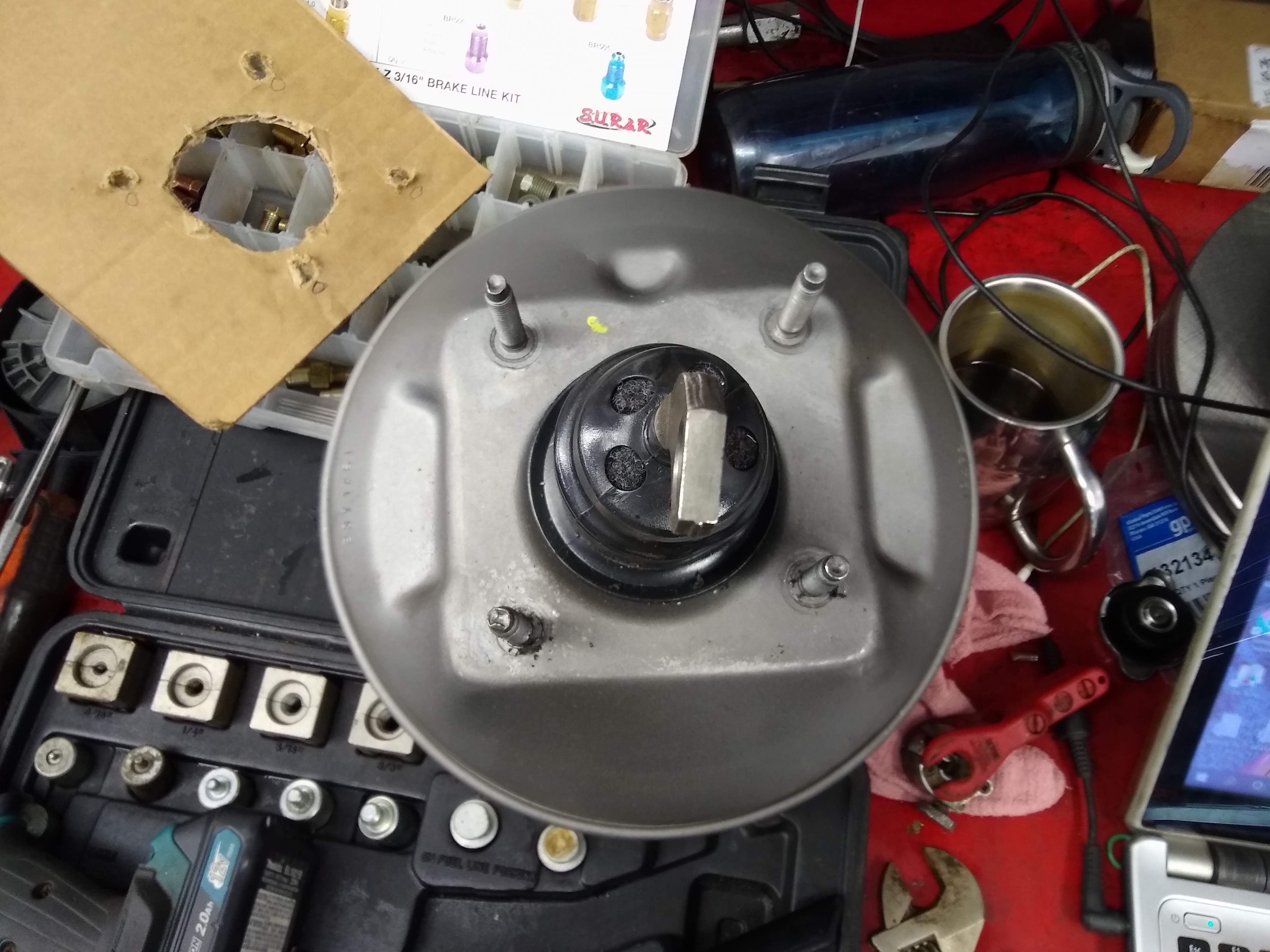 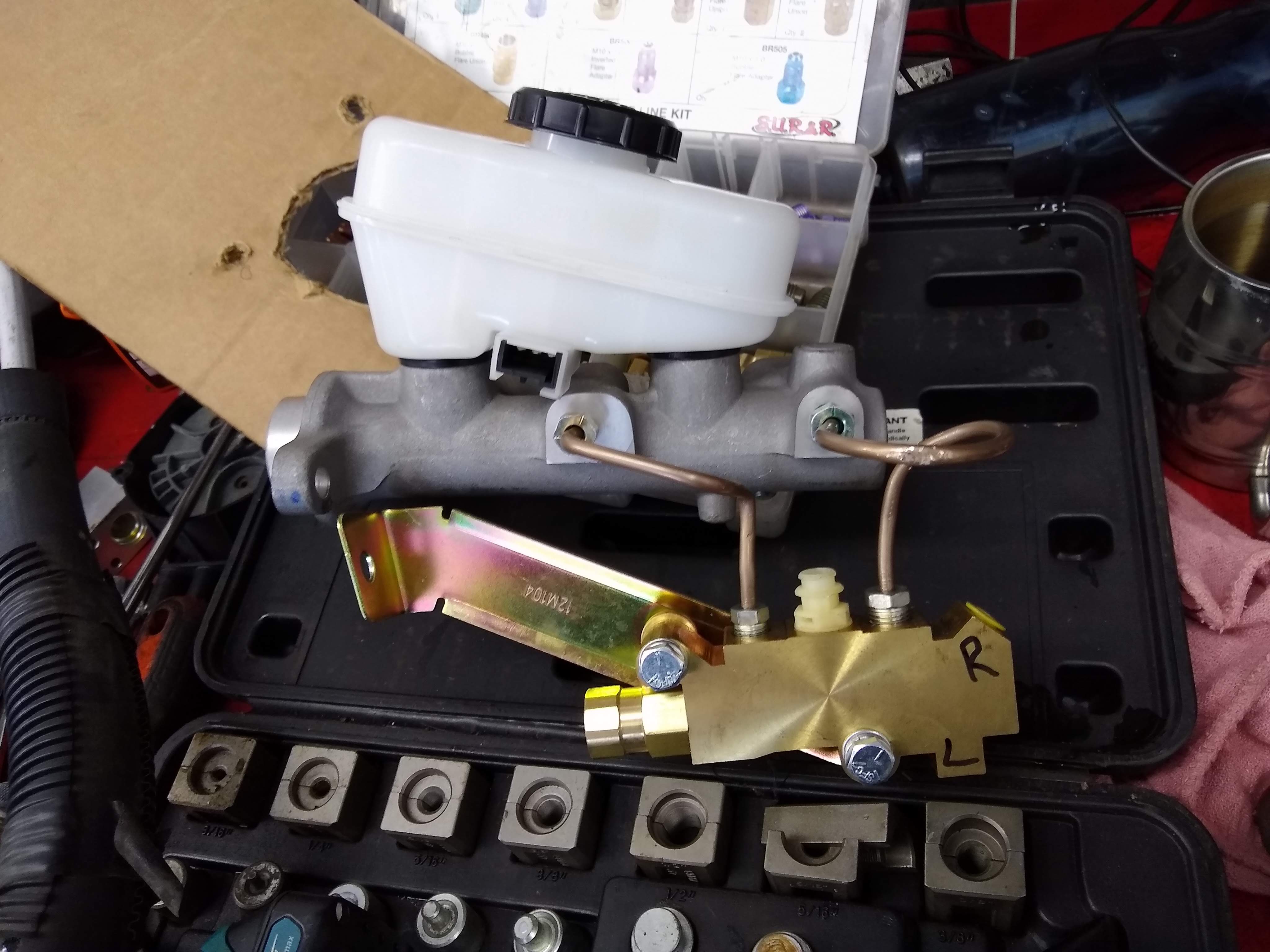 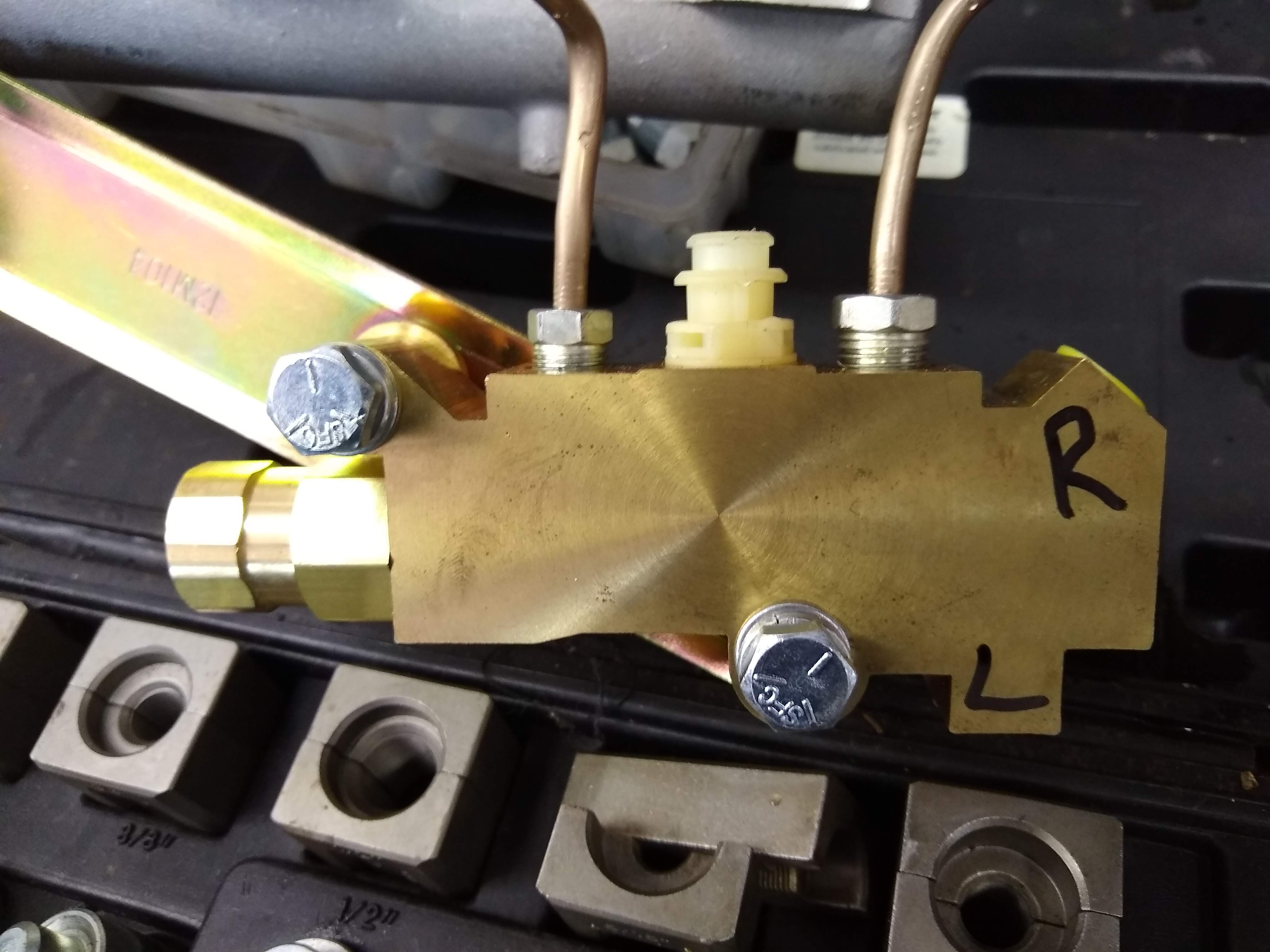 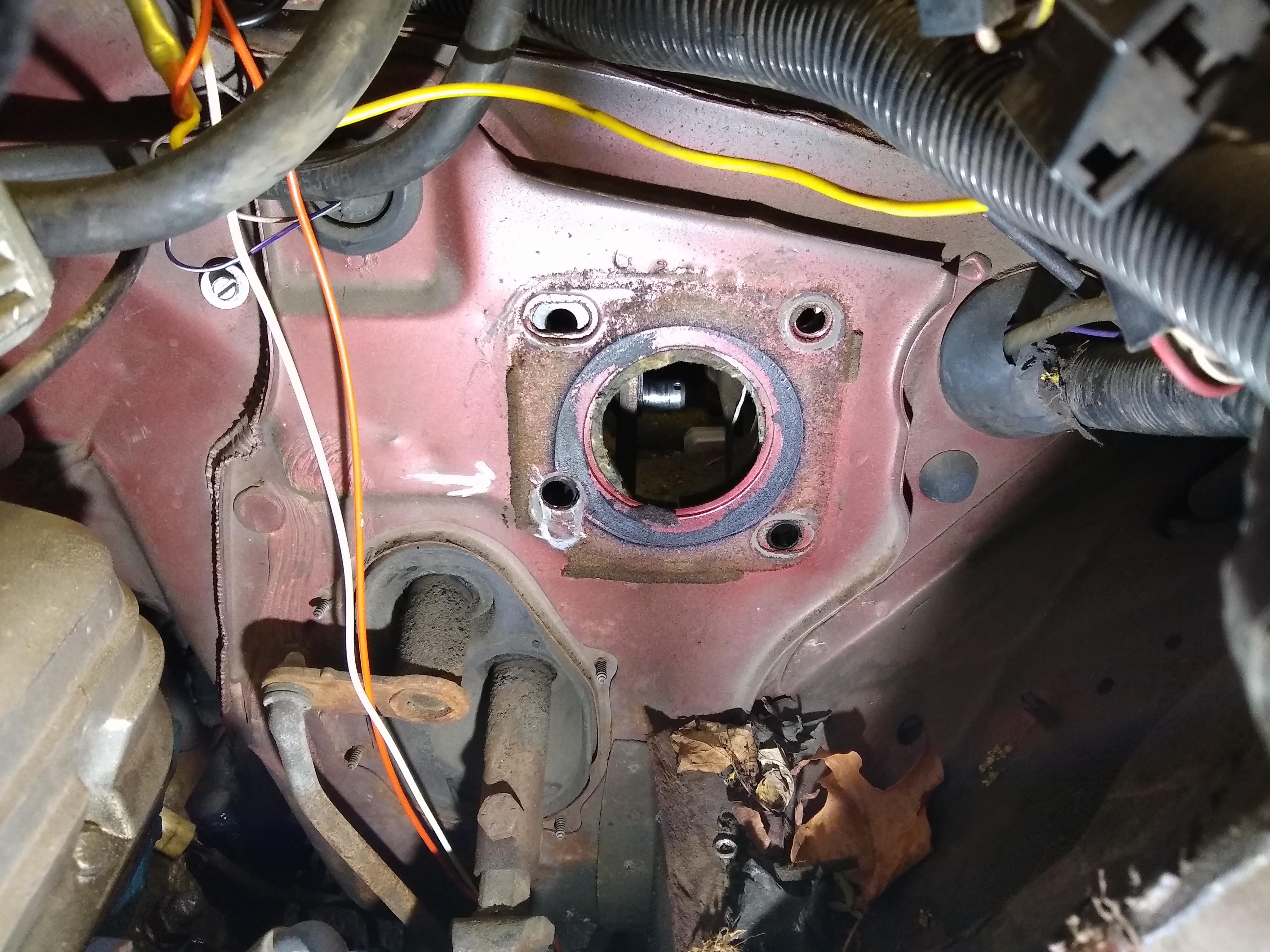 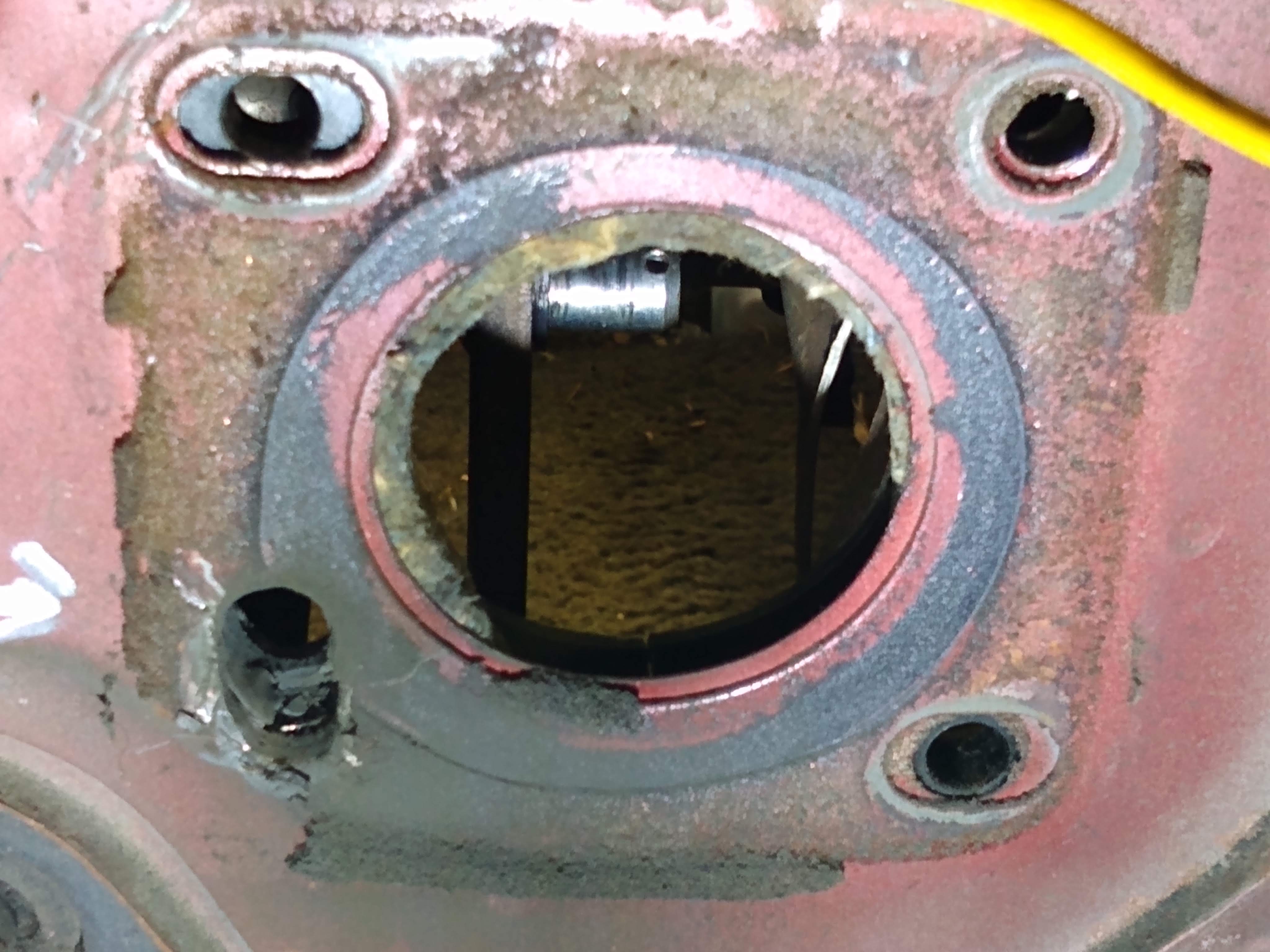 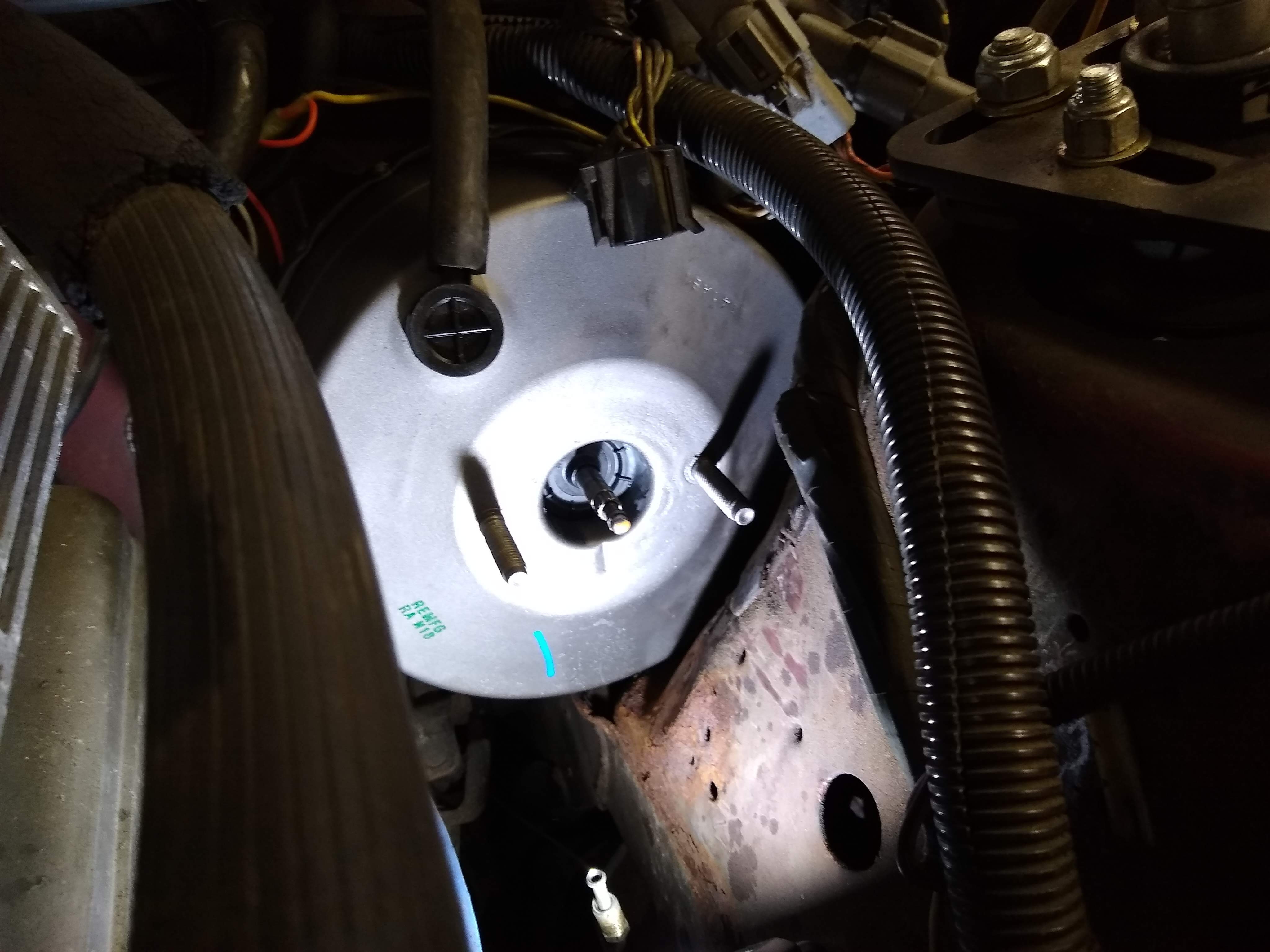 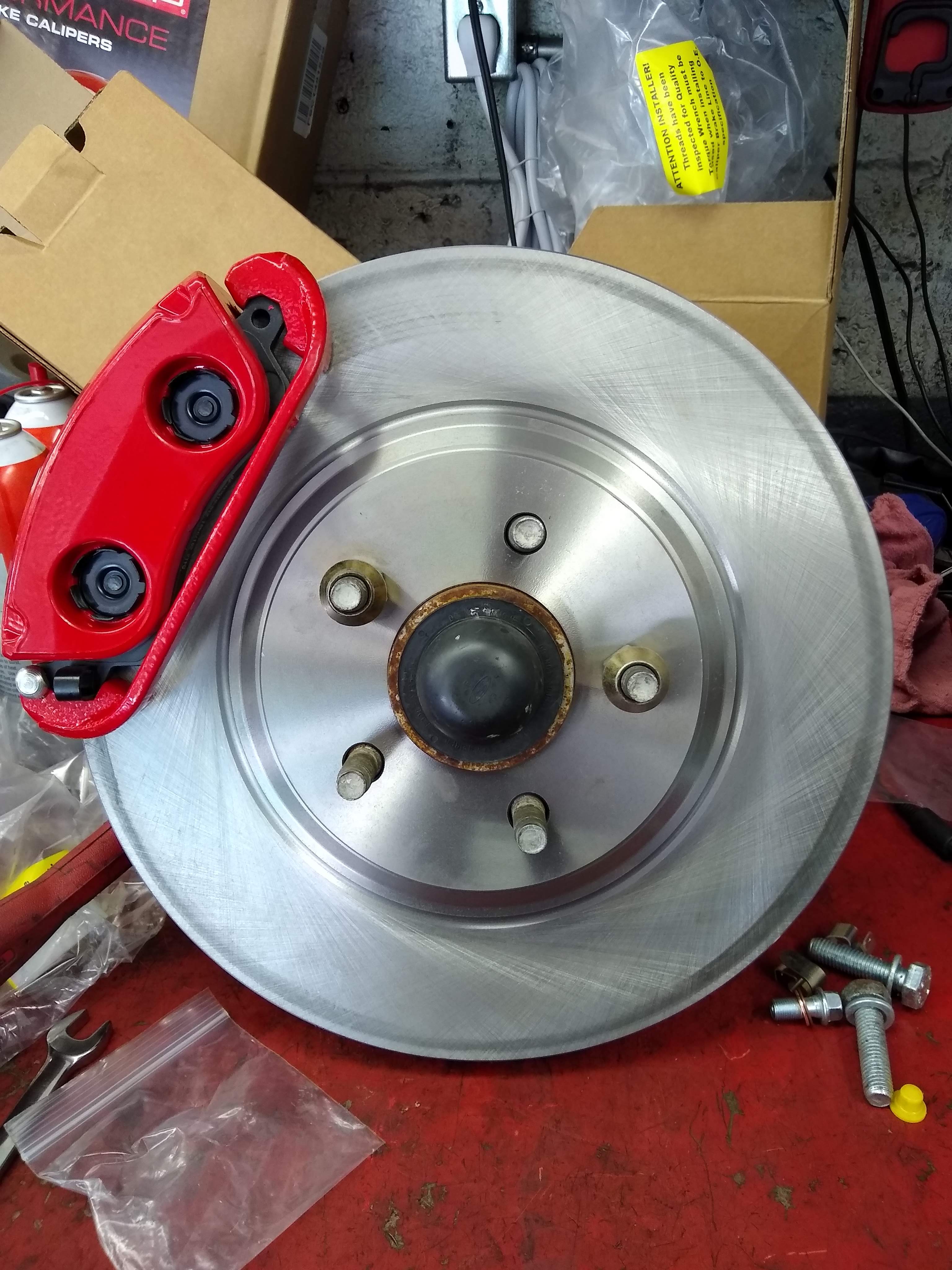 Swapped SN-95 inner and outer tie rod ends, installed Steeda X2 balljoints and spring spacers, installed SN-95 spindles, and put my 18 tooth speedo gear back in.  The 23 tooth gear I took out looked like hell, just like they talk about, it was torn the fuck up.
Ignore the coilovers, they didn't stay 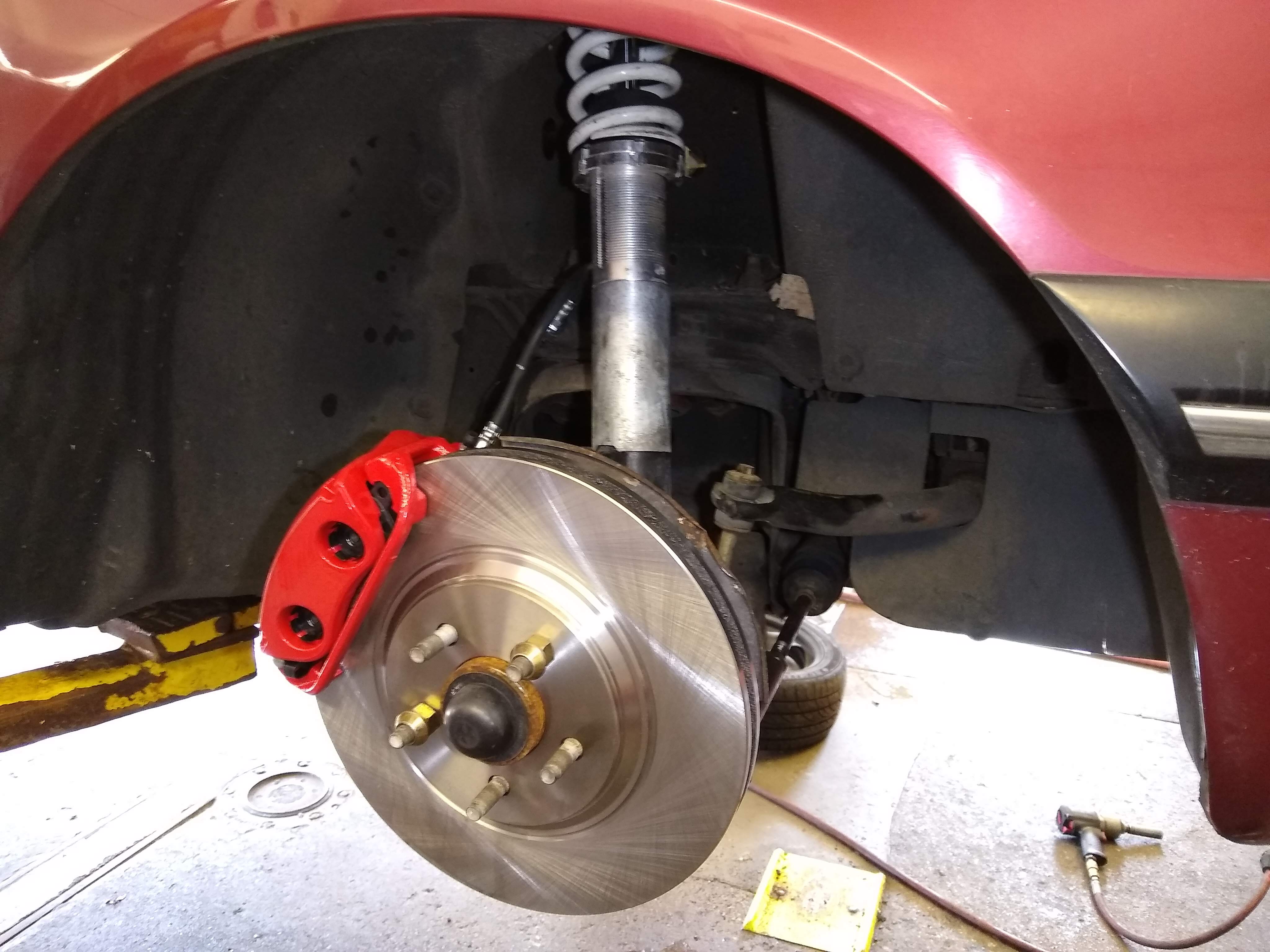 Reset alignment, and set in the new brakes.
They're the shit
(bonus: no gear oil smell, no diff noise, and the speedo was accurate again)


7
So I'm not 100% on whether or not I'm going to 5 speed swap, but I want to put feelers out for a clutch/brake pedal assembly.  Who has one?  How much do you need for it?  Or at the very least, what should I pay?  Just about everything else I need is relatively easy to find, but the pedal seems to be a bit difficult.  If I got one, I could at least sit on it and think, or maybe keep gathering parts based on opportunity.
8
Now that Chuck is out of the business of making badass shit, who do I turn to for engine mounts?  I've recently started hearing the safeties on my hydraulic mounts banging over bumps and moving into and out of WOT.  For mercy's sake help me.
9
It's a beast.  Just came today, putting it in tonight when we close the shop.
I'll get a side by side shot later when I get the old one out.

10
I'm starting a new project.  I'm building an active exhaust, and I'm using fast actuating electric exhaust cutouts (that I have to first build), but I want to be able to have them open based on percent load.  Since I've been tuning with a Moates Quarterhorse, I've found I have control over things I otherwise wouldn't and it occurred to me that I can adjust the load at which the EEC opens the WOT cutout relay for the AC compressor.  What I need to know is: Can anyone tell me if the EEC commands the relay open when the AC isn't actually on?  I don't know if the EEC has to first see signal on the ACCS (pin 10, pk/lb) circuit to enable WAC (wot cutout pin 54, o/lb), or if it will command the relay even when it doesn't see V on ACCS.  Anybody have any idea?
11
So I've got a trick-flow trackMAX stage 1 cam, like some of you guys, and I'm wondering what your idle is like.  Mine is somewhat rough and a little lopey.  I'm trying to decide if it's a characteristic of the cam, or if I've got some sort of problem.
12
The winter project is going to be a floor console conversion and, if there's enough money, manual trans. Who has everything I need? I have grey interior, so that's preferred,  but if I can't get it all grey,  I'll make it grey.
13
Anybody ever think about trying to retrofit an electric cruise servo?  My vacuum servo works just fine, except it's slow and clumsy due to the lower vacuum available from my current engine setup.  Early electric units use the same steering wheel switch resistance values and VSS sensor, so I was wondering about making a custom cable for one and trying to convert.

Here's what I know:
F8VZ-9C735-BA is the servo for 92 or so Crown Vic
DY588 is the Motorcraft number for the VSS on BOTH CARS
Resistance values are exactly the same for the switches on BOTH CARS
The Crown Vic system uses a pressure deactivation switch (recalled several times) that can be eliminated by running the Key On power to it's pin, probably safer that way, anyhow.
Both cars have a brake pedal feed that works the same way

The big blank is a cable that would work, but it's easy enough to adapt one.

Thoughts?
14
Anyone with my same combo (see sig), or close enough, have EEC tuning done?  I'm looking for a close starting point .BIN file.  I installed my Moates Quarterhorse, and I've fed it a stock A9P calibration so it'll run.  All I really wanted was to kill the speed limiter, and software calibrate for 30# injectors, but it seems like it's going to be more involved than that.  Also, I'm still waiting for a license code for EEC Editor, I've been fumbling with TunerPro RT to get this far.  Anybody skilled?
15
How's anybody else going to be cool now?

Damn, always ruining it for everyone else.  This is why y'all can't have nice shit, I swear.

Later this summer I'm going to get a sequencer.