1
Looking for a '87-'88 Thunderbird headlight or headlights to use as a HID projector testbed. Right or left doesn't matter. Condition doesn't really matter as long as I can cut a hole(s) in it and slap an HID in there.

Can't believe I threw my old ones out when I ordered my NOS ones several years ago.

2
Anybody know the proper belt tension on an '87 3.8L? It's a manual tensioner for a serpentine belt. My Hayes and Chilton manual don't have anything about it. My Helm manual is packed up for our upcoming move.

Going to pick up a Dayco #93866 to get it set right instead of just guessing.

http://www.daycoproducts.com/dayco%C2%AE-belt-tension-gauges
3
Hooked my transmission cooling lines back up to the radiator and the upper one is leaking like crazy. Took it apart and didn't see an o-ring. Don't they come with an o-ring to seal up the at the flare on the line? Anybody have a PN so I don't have to fiddle around in the HELP! isle?

4
For reasons that escape me, when I bought my Factory Helm manual for my '85 Cougar, I purchased a used copy. I've been careful with it, but several of the pages have come unbound and it's a pain in the butt to use when I need to. http://www.helminc.com shows nothing anymore for our cars (thanks buttholes!) so I guess ebay is the only real way to get factory manuals any more?

I'm tempted to unbind the whole thing and run it though a copier to make a digital copy to prevent further degradation.
5
Many moons ago I bought a Thule roof rack fit kits for my '87 Thunderbird and '85 Cougar. Sold the '85 and plans have changed for the '87, so I doubt I'll ever need these parts.

My 66 fit kit is NIB from rackattack.com

Haven't actually taken it out of the box yet... 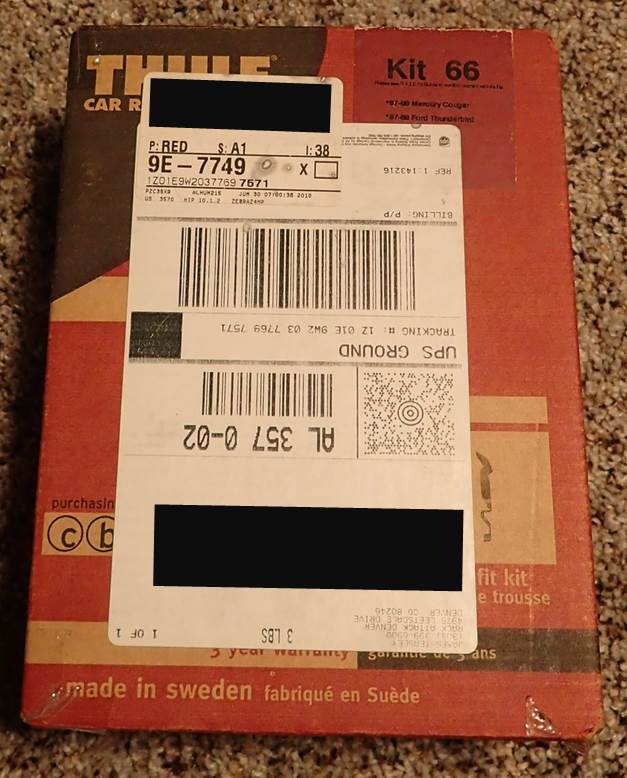 Saw the Oil Pump Repair Kit on rockauto for 1/3 or normal price due to "Wholesaler Closeout" and got it. Tonight, several months later, I pull it out and get ready to install it. First, it looks like the cardboard box it came in is straight from the 90s (and probably is). Second, the kit is missing the relief cap, rendering the kit useless. D'oh! Will have to order another one, now at full price!
7
I bought a boat recently (because I need ANOTHER project! :hick:), and joined a forum that supports that boat manufacturer. Actually, I bought the boat, and noticed the next day that the forum was down for what ended up being a month and am now going on 10 days waiting for my account to be approved by the admin. The admin does a fundraiser each year to keep the forum alive. Boat manufacturer had financial difficulties, quit financially supporting the forum, and eventually went bankrupt. It looks to be 1/8th the size of this one, and yet they fundraise $875 or so each year to keep the forum going. It's uses phpbb software.

It looks like our forum is ~$250 a year, yet is 8 times larger. How the heck is it costing them $875 a year?!
8
Picked up a 2012 Prius v over the weekend. It's basically a Prius that's a little wider, taller, longer and a has 3" stretched wheelbase. Same powertrain, with a slightly shorter axle ratio to account for the extra mass and frontal area to move around. Much larger rear hatch area. It can fit my 70lb black lab, while the Prius hatch area slopes down steeply, precluding my doggie from a comfortable ride.

Nearest competitor is something like a Honda CR-V, Toyota RAV4, or Hyundai Santa Fe. Prius is rated for 44/40 while the CR-V/RAV4/Santa Fe are 20-22/28-31. Didn't really want a Hyundai and a similarly trim'd out CR-V/RAV4 was the same price as a Prius v, so I went with the v. I also like the plethora of OBD-II PIDs the Prius folk have deciphered. Somewhere around 350 that are streamed to my phone/tablet via a Bluetooth dongle plugged into the OBD port. Coolant temp? Check. AC Compressor rpm and power? Requested engine torque? Check The engineer in me loves it. :D

It's not much in the fun to drive department. That's what you give up by gaining the fuel economy. Steering is light and feeling is dead. Brakes can be a bit nonlinear when the friction brakes activate (after you've saturated the battery recharge capacity or nearing a stop at slow speed). I haven't done a quick lane change yet. I test drove one with 16" wheels (mine has 17") and it was a muddling mess, as expected. The last Autocross of the season is December 14th (HoHoHoooo version), so I should be able to sling it around some cones by then.

The one option it has that I like is the Radar Cruise Control. You set the distance to follow (far, medium, close) and the cruise will automatically track the person in front of you if they're going slower than your cruise set speed. Really nice in light/mild traffic on the interstate.

First tank from the dealer was 44 mpg doing 70 mph on the interstate. Daily driving this week so far is ~47mpg.

Was my first car, circa 1996. Drove it until 2009 when the C5 bit the dust. Had the bright idea of swapping in a 2002 3.8L and 4R70W. That was 4 years ago. :disappoin I was planning on building a 2 car shop at my new house, with room for the Cougar and T-bird. However, it turned out the lot has septic instead of sewer (long story) and a shop isn't going to happen. Put my old house on the market last Tuesday. Got a contract on it 8 days later. So, the Cougar has to go.
10
I'm trying to decide on what color to paint my '87 T-bird, when that project comes to fruition (~2070 at my current pace :hick:). While touring the Camry plant a few years ago in Georgetown, KY I saw this striking metallic green. Turns out it is called Spruce Mica. It's a darker metallic green that almost seems to change to black depending on the lighting. Google Image Search

I love the color, but am worried it won't work on an older car. The only non-Toyota I've seen with Spruce Mica is a C5 corvette, and that guy had terrible photograph skills.

Thoughts on Spruce Mica?
11
As I posted in the racing forum, the head gasket in my '87 3.8L Thunderbird took it's ball and went home during the first event of the day - skidpad. :(

At a minimum, the head gaskets need replacing. Engine has 262k miles on it. Timing cover also needs a reseal -leaking coolant. While I'm at it, might as well throw in a oil pump repair kit. Valve seals? Anything else I should probably do while I'm in there?
12
After 4 or 5 years, I'm finally going to be able to take the T-bird to the local Performance Driving School.
http://teamtac.org/e107/e107_files/public/1360861720_1314_FT75757_2013_school_print.pdf

Won't be able to make the Sunday Auto-X though :(

I'm really curious how the this mismatched sumbitch drives! I've got 275 lb coilovers on the front. Stock rear. Should understeer like a bulldozer! Hope the AOD doesn't rearrange to DOA!
13
Anybody got a stick of PC133 SO-DIMM laying around? Would make for a nice upgrade for my printer so I can print PDFs faster.

$30-50 seems ridiculous to buy new "old" RAM!
14
Anybody have a secret way of removing the passenger side O2 sensor on a CFI 3.8? The angle is too great for me to use a u-joint. I can't get an open end wrench on it. Can't get at it from the bottom? I vaguely remember when I had a shop to it several years ago, they mentioned dropping the engine. They didn't remove my exhaust, so it opened up a weak spot in the exhaust past the pre-cats.
15
I need a C3/C5/AOD Floor shifter and cable assembly. Want to be able to shift my 4R70W.